A Taste of Biodiversity for Breakfast

If the world’s economy was decreasing at the same rapid rate as biodiversity, there would be greater urgency to make a change now. For many people – and many businesses – biodiversity is an unknown importance in its impact on, not just an ecosystem, but our world.

On the 22nd April this year, we hosted a Biodiversity Breakfast with the idea to communicate and educate on the importance and desirability of biodiversity within a corporate context. There are many organisations who would love to contribute more in the conservation and environment space but are limited by the ‘how’. We were delighted to have Queensland Chief Scientist, Professor Hugh Possingham, to share his insights on this crucial topic.

Hugh Possingham equated the current trajectory to an ‘asteroid’. He says, “Biodiversity is being destroyed at 100-1000 times the “normal” rate. If the decline of the planet’s biodiversity continues at the current rate, it will take 1 Million years, or 50,000 generations to recover.”

So, why does Biodiversity matter? Biodiversity refers to all living organisms on Earth – over 8 million species – which form part of a complex and interacting system that sustains life. Life on earth provides environmental services that we depend on like water purification, pollination, disaster risk reduction, food security, physical and mental health benefits and more. Biodiversity isn’t just the 8 million plus species on the planet, it also includes ecosystem diversity and within-species diversity. The genetic diversity of the major grain crops that feed humanity are important for global food security.

The conversation around biodiversity is messy and complicated. With the complexity of environmental markets and the additional benefits that biodiversity improvement can achieve, global and local business and markets will need simple and unambiguous biodiversity accounts that are transparent and verifiable. We can’t measure the changes to the 8 million plus species, but we can make it more manageable by measuring threatened species and sentinel animals like birds. Measurements need to be independent and verifiable which aren’t influenced by user bias and skill level. Scale-able measurement technologies like satellite data, camera traps and acoustic monitoring will be part of the biodiversity accounting system for achieving Nature Positive.

We’d like to thank all our guests who attended and participated in this and we are particularly grateful to Hugh for helping us promote Biodiversity within a corporate context. Our goal is to continue the conversations sparked at the breakfast so that businesses may articulate their challenges and promote meaningful change. If you’d like to join the conversation on how biodiversity can be part of your business, please get in touch: info@qtfn.org.au. We’d love to hear from you. 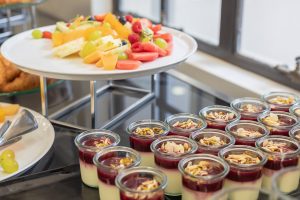 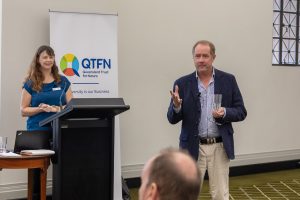