A Turtle Sanctuary at Avoid Island

Over each summer from November to March, it’s turtle season at our Avoid Island Nature Refuge. Avoid Island is located 100 km southeast of Mackay, in the salt waters of Koinmerburra Country. As one of the three largest Flatback turtle (Natator depressus) rookeries in the southern Great Barrier Reef, our team aim to survey and monitor the island’s beaches twice a season in collaboration with the Mackay and District Turtle Watch volunteers.

Over November and December in 2021, poor weather created access difficulties to the island for our turtle nesting census. However, we still managed to successfully record data during the two-week turtle census period. In this census, we tag and record nesting turtles and mark out nests for our return visit. The Flatback turtles lay less eggs on average than other sea turtle species, with a modest 50 per nest. Avoid Island Flatback turtles collectively lay thousands of eggs each nesting season with a high hatching success rate – largely due to environmental factors on Avoid Island. The beaches are free from coastal development, artificial light and non-native predators such as feral pigs, foxes, cats and dogs. This means the turtle hatchlings have a much greater chance of survival than those emerging along the mainland Queensland coast.

In early February, our team returned with Mackay and District Turtle Watch to gather data on nests that had hatched. Flatback turtles have a challenging start to life. They emerge from their shells buried deep in the sand and must dig to the surface, then travel safely down the beach to their new ocean home. Our regular monitoring allows us to better understand the behaviour and nesting ecology of this threatened species.

Queensland Trust for Nature manages Avoid Island as an education and research hub, with a primary focus on monitoring the Flatback turtle and preserving threatened terrestrial ecosystems. To ensure this important turtle rookery continues to support high numbers of nesting turtles, we will document nesting ecology into the future and investigate how this is impacted by human-induced climate change.  We need more data to predict and model the spatial intensity of risks and we need ongoing hands-on habitat management to implement climate-ready interventions.

As the only privately owned Nature Refuge in the Southern Great Barrier Reef, Avoid Island is testament to how private investment in conservation can extend and support Queensland’s protected area estate. 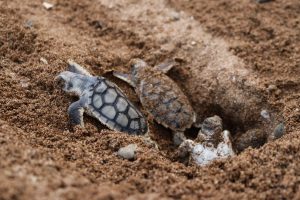