We are proud to announce, another Queensland Trust for Nature property, Gurrbum, has been declared as a Nature Refuge. This 15.52 hectares of Lowland vine forest has now been protected in perpetuity to ensure sanctuary for the Endangered Southern cassowary (Casuarius casuarius johnsonii) for years to come. The Gurrbum Nature Refuge forms a critical part of a biodiversity corridor of State ecological significance that buffers, compliments and connects Japoon National Park and Tully Gorge National Park and Walter Hill Conservation Park.

Over the past two years, the restoration project at Gurrbum has worked to protect a significant habitat corridor for the Endangered Southern Cassowary at Smiths Gap, North of Tully. Queensland Trust for Nature joined forces with the Community for Coastal and Cassowary Conservation (C4) and Terrain NRM to convert this cleared banana plantation back to its rainforest roots. Since 2019, Gurrbum has been a hive of activity to put 14,000 native trees in the ground, across nearly four hectares, including cassowary food sources such as Bandicoot berry (Leea indica), Cassowary plum (Cerbera floribunda), and Quandong (Elaeocarpus johnsonii).

We’d like to thank the dedicated band of planters and weeders who braved sun and rain, many of whom volunteered on multiple occasions at our community plantings between January and July. Much to our delight, one community planting was visited by a juvenile Southern cassowary, moving across the planting area into the neighbouring National Park. The efforts of these 40+ volunteers and contractors have helped restore and enhance the property’s biodiversity by re-establishing a critical corridor for cassowary to move from the mountains to the coast.

Preparation has already begun for next season’s planting that leads up to the designated house site. When this is complete, the property will be resold within our Revolving Fund as a conservation block for a single home site surrounded by wildlife refuge. 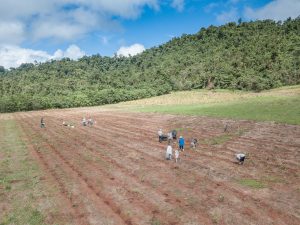 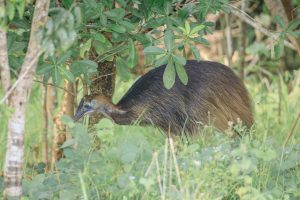