Queensland really does have some amazingly diverse native insects and invertebrates that deserve as much attention as our other famous fauna!

Whilst some invertebrates may not be considered threatened, their potential loss is increasingly worrisome. Why? Because they still do very, very important jobs. Australian native bees are not only extremely beautiful, but they are also diverse and completely different from European honey bees.

Australian natives are known by researchers to pollinate flowers and crops much more efficiently and even use special tactics such as ‘Buzz pollinating‘. 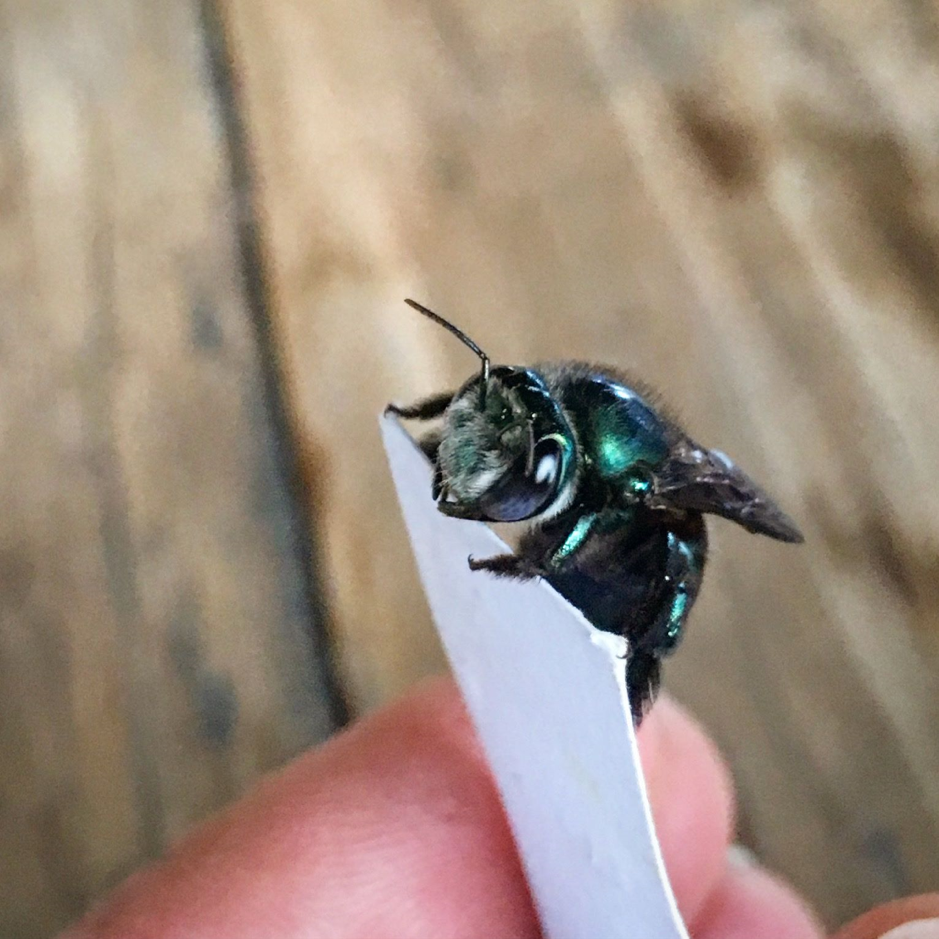 A fuzzy and shiny Peacock carpenter bee (Xylocopa bombylans). Look at its strong jaws which it uses to bore into wood and build its nest.

On the weekend of March 2nd and 3rd, QTFN teamed up with the Ecology Centre at the University of Queensland and the Entomological Society of Queensland to spend some dedicated time checking out what these amazing spineless animals are living on and how they’re maintaining the landscapes of Aroona.

Twenty keen bug catchers of all ages set up camp, set up traps and set up an amazing plethora of guidebooks to document what we found. The tally is still rising as specialists look through their collections and photos. Leaving the property we had documented 38 different families of insect and at least 68 could be identified to species (which can be very difficult for a non-expert, in the field). 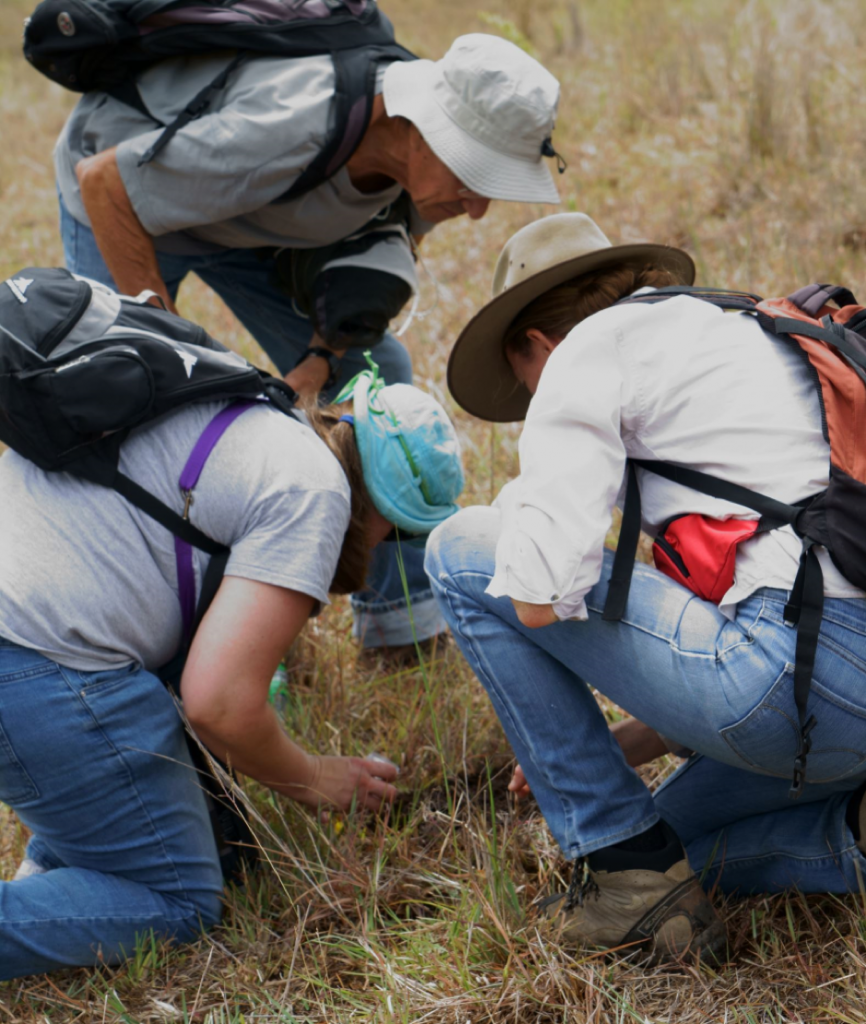 Some of the highlights include the amazing “magic school bus” caterpillar, as it was called by one of our participants, which is the caterpillar of an Acacia cup moth. The team caught several different native bees, including two different carpenter bees. Carpenter bees are very different from European honey bees as they generally live alone and build their nests by tunnelling into the wood with their strong jaws.

The star of the trip, the affectionately named “magic school bus” caterpillar Calcarifera ordinate, chomping away on its wattle tree food plant.

And last but not least, Kathy Ebert our volunteer dung beetle expert found a huge range of introduced and native dung beetles all of which are incredibly important for the Aroona landscape.

Native dung beetles are specialised to deal with the dry tough poop of our native fauna. Fun fact – some are even specialised to hang off the bums of wallabies waiting for the freshest poop! 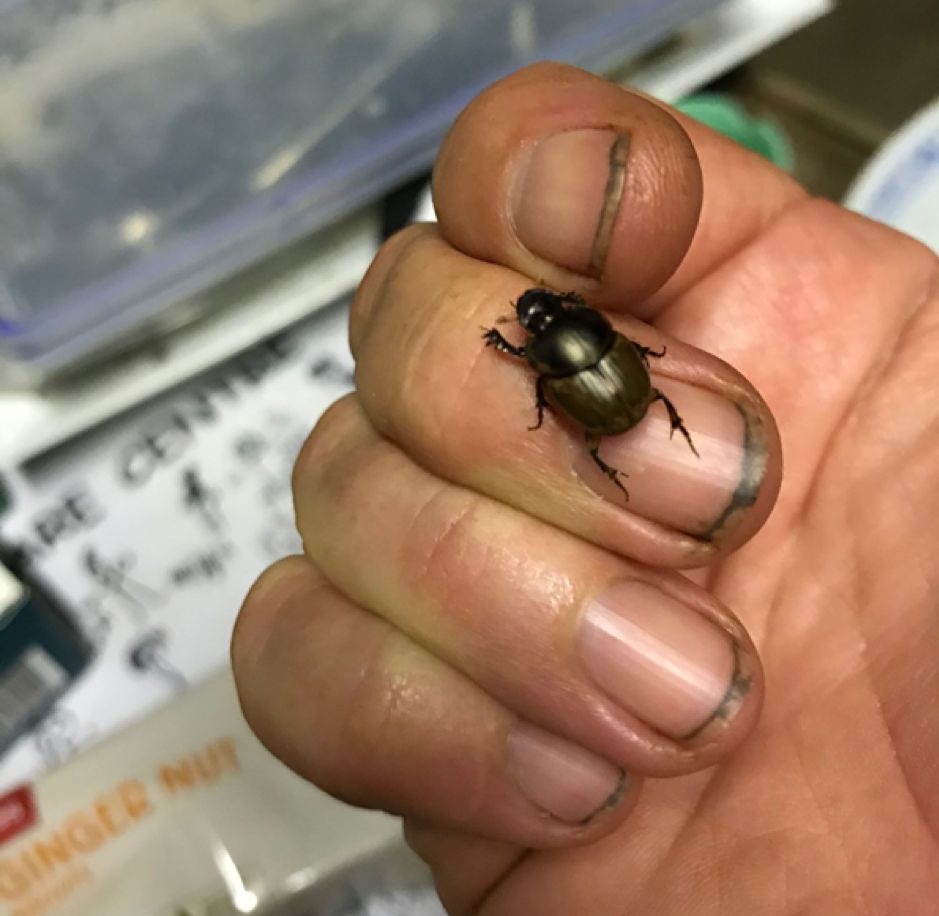 One of the introduced dung beetle species helping clean up poop at Aroona is this Gazelle scarab – Digitonthophagus gazella. Check out its amazing digging arms in the front and, if you get up close and personal, you’ll see its adorable horns.

Us Aussies can thank ourselves for introducing dung beetles which clean up all the cattle and horse poop that litters the Australian landscape. It wasn’t until their introduction, our landscape was victim to constant plagues of flies.

Thanks to Kathy, QTFN hopes to keep watching our dung beetle populations as a way of monitoring the health of the Aroona landscape.

Thanks to everyone that came along and made this weekend great, despite the showers I certainly left bright, cheery and full of new bug knowledge.